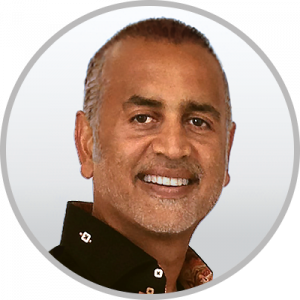 Tushar is formerly CEO of Simplikate, a Phunware acquisition. He has been a CEO over the past 25 years for various technology based companies. He is fascinated with identifying brilliance through simplicity. His career is focused toward merging efficient well tuned Intellectual Property and Companies together to create a “whole” that exceeds the sum of its parts.

In the 1990s, Tushar founded a web company out of his spare bedroom by teaching himself to code. He hand-built Nokia’s first ever global website that subsequently launched several other Fortune 5000 companies’ first web presences. Through clever and rapid M&A, he merged with other small web shops into USWeb to become the de facto standard for corporations to consume all their web needs through a single organization culminating in an IPO that valued the group at over $1billion within 2 years.

Tushar soon became an investor and Director of the Board for Photonics Systems which supplied high resolution displays to the US Air Force ( N.O.R.A.D. ) and the US Navy ( Aegis Class Destroyers ). He also served as a Consultant to the US Congress and formally testified before the House Judiciary Committee to help draft the Digital Millennium Copyright Act of 1998 ( DMCA ). His testimony is part of the Official Congressional Record and is referenced regularly in digital copyright cases to this day.

His next venture, Simplikate, created B-to-B mobile solutions in 2002, before “Apps” were Apps, on a Palm Zire 71. Eventually those solutions evolved with the advent of the iPhone into a mobile platform that launched the very first Smartphone Apps for the leading Malls, Airports and Luxury Hi Rises worldwide including Verizon FiOS.

Alan, Phunware’s CEO, met Tushar as they pursued the same customer and after just one meeting between the two, they realized they both shared the same philosophy of finding partners who know how to say “Yes” ( saying “No” is easy ), so Phunware acquired Simplikate and closed in a record 6 weeks end to end.

Tushar’s role at Phunware is to replicate this M&A success by evaluating and acquiring successful, entrepreneurial companies with proven multi year recurring revenue models that exponentially add fuel to Phunware’s comet trail toward touching every connected device worldwide in a meaningful way through its platforms and to establish strategic licensing of Phunware’s extensive home grown patent portfolio. Due to his extensive executive business experience, Tushar oversees all significant “deal” negotiations for Phunware and is the official Signatory Officer on all contracts.

On a lighter note, Tushar has also been a stand up comedian, national spokesperson and almost drafted by professional baseball as a south paw pitcher.

Thank you for your interest in the PhunCoin Whitepaper. A copy can be found on CoinList for verified purchasers or you may request a copy by contacting Randall Crowder: rcrowder@phunware.com.